We hung out with a few very special kids and asked them a few important questions: "What is happiness?" "What is love?" "How would they stop the fighting and feed everyone?" And we filmed our chats. Here is the video for the question. "What would you tell the world?"

As part of the Four Corners  Project we have made a short film - One Voice - to educate people on their voting, rights, responsibilities and obligations.
One Voice is a round table discussion designed to encourage every citizen to consider the power of an educated vote: if the contemporary vote counts, what is the responsibility of the voter?

When Georgia was at Alopeciapalooza speaking to the amazing kids with Alopecia in 2013 she promised them in her talk she would make them a video in 12 hours to show the world that they really are her superheroes and will make an incredible difference in the world. This is the video she rushed together for them - but no amount of rushing could take away from the magic of these faces and hearts.

A docu-series about three kids traveling the world and sharing their passion for skateboarding.
SKATE is the first TV show starring three regular kids, not pro skaters, just kids that love to skate! These three kids travel the world and meet other kids just as passionate about skating boarding. While skating together they learn about the country & culture, and get to give back to the local communities.It is also the first teen travel show with the option of being shot with support Virtual Reality Content (see Our VR projects)

Occasionally we just like to shoot things because they are fun and touch our hearts. Here are a few of them:

The World According to Kids

A few short things for Fun

A talks how/docuseries that celebrates children and young adults who were given lemons in life and chose to make ‘Lemonaid.’

​
Lemonaid is a talks how/docuseries that focuses on how something challenging can be turned into something truly great. It is a show that tells the stories of people who were given lemons and made ‘Lemonaid'. Lemonaid’s host Georgia, has lived a life filled with lemons but she has never once allowed herself to see them as lemons instead she has made it a personal challenge to make the best ‘lemonaid’ she can from every lemon. On this journey she has met many inspiring, brave and joyful young people who have been handed some really rotten lemons, but have taken these devastations, tragedies or trials and turned them into businesses, foundations or missions that have changed not only their own lives but the lives of hundreds of others around them. It is time for their stories to be told so that they can help our host lead by example; To show our audience that anyone, no matter who you are, how old you are or where you come from, can take the ‘worst thing that has ever happened to you’ and turn it into the best thing that has ever happened to you. 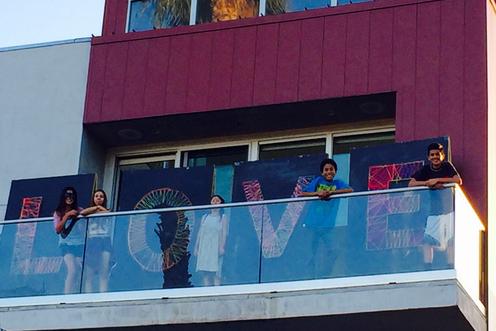 In conjunction with the team of Arts Bridging the Gap we brought together families from all different cultures and experiences and created LOVE literally :)
We filmed the whole process of the art piece creation and came up with this fun piece.
Here is the final piece of art with a few of the wonderful kids of Arts Bridging the Gap.

Baby Let Your Hair Hang Down
A feature Documentary about one girl's journey with Alopecia Areata and how losing her hair helped her to find her purpose.
The film has been shown at the Doc Miami Film Festival, the Los Angeles International Women's Film Festival, The Miami Film and Arts Festival and won the Human Interest Award at the Monaco International Film Festival. It has been featured on ABC's 20/20, KTLA News and the Huffington Post.
This film has provided much needed support for the Alopecia community. Further more its wider success proves that people are searching for a place to feel understood and permission to be honest about their challenges.
We are so excited about the support, perspective and connection this film has offered so many people both with and without Alopecia.

Love - with Arts Bridging the Gap

I am Spartacus Entertainment

We believe in the magic of people, stories and entertainment